I began my television/video journey in 2010 while interning for ABC 6 in Providence, R.I. One of my first assignments was to cover the 2010 NBA Finals, the New England Patriots, and the Newport Tennis Hall of Fame- to name a few. I am a former Division 1 college athlete, who loves sports, so that's why I chose to cover sports.

Any chance I would get, I would grab my camera, tripod, microphone and head out the door to make stories come to life! I quickly became enamored and knew this was what I was meant to do.

My first full-time break was as a production assistant for the New England Patriots. In addition, I hosted a segments on a weekly showed produced by New England which aired on Comcast Sports Network. It was pretty cool considering my work was airing in a top market so early on in my career.

After a season with the Pats, I became a Sports Anchor/Reporter for a television station in Georgia. On a daily basis I would shoot, edit, write, report, and anchor my work. I spent two years in Georgia.

In 2014, I packed my bags and headed to the snow-covered hills in Buffalo, New York as I accepted an offer to be one of the Buffalo Bills' in-house reporters. I spent two amazing years with Bills when I decided to move into the wonderful world of marketing.

From Buffalo, I moved to sunny Georgia to accept a position as a Marketing Director, marketing attorneys in Atlanta, Georgia, Columbus, Georgia and Auburn, Alabama. Recently, I was WTOC's Morning Traffic Anchor but left that position to run my own business fulltime.

In the process of my extensive television journey I earned my Master's Degree in Communications and Information's Management. I always wanted to be able to own and operate my own video and marketing firm and knew that achieving my Master's would help that dream come true.

I recently met the absolute love of my life, Jason, and moved to Bluffton, SC where Jason and I recently got married. 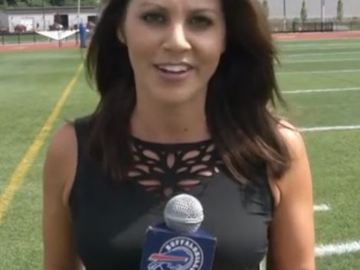